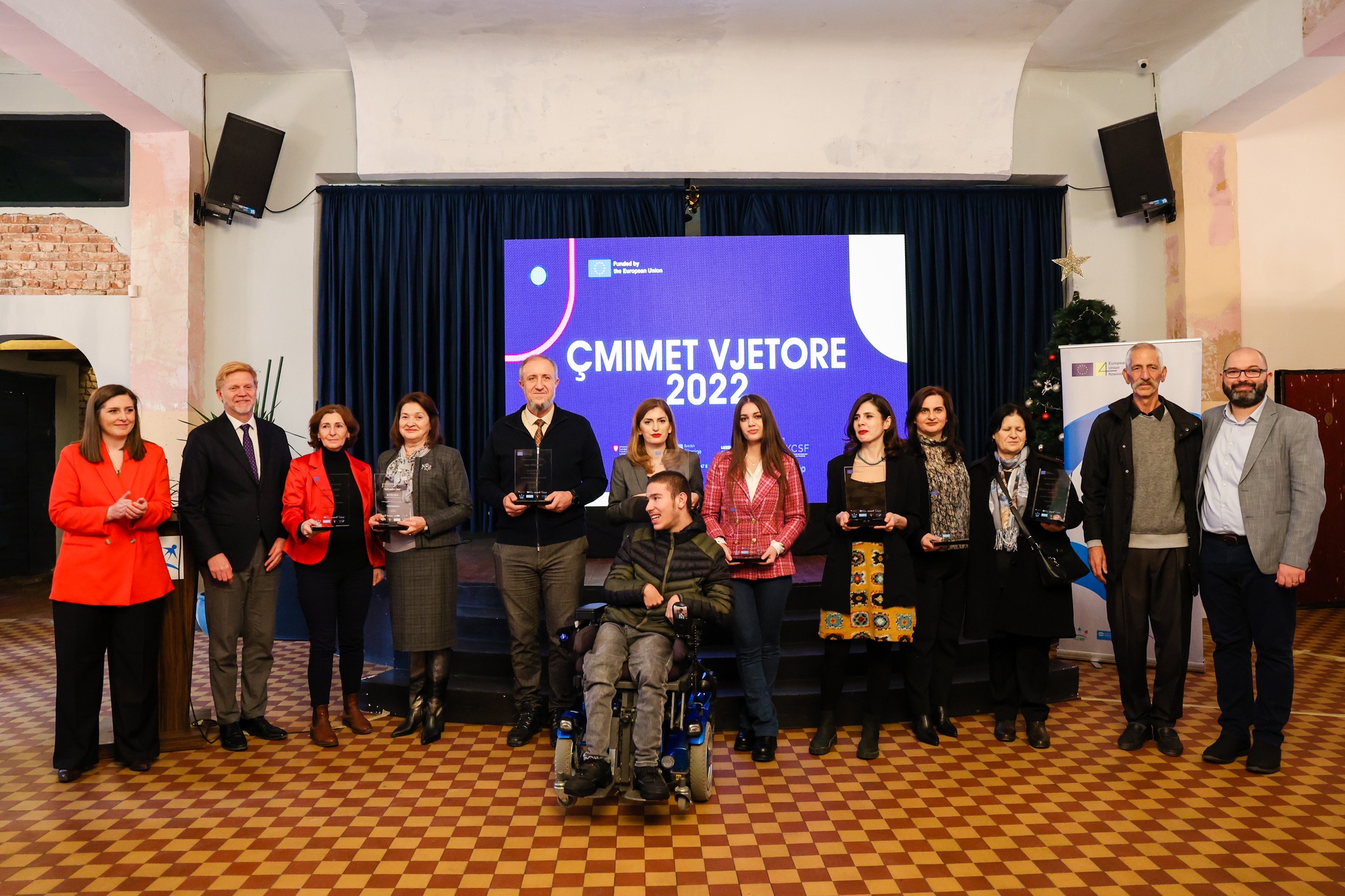 This year, KOMF awarded three annual awards in the field of child protection journalism and five annual recognitions under the title “Friend of Children”, for individuals or entities that have contributed to social services and child protection. The evaluation panel for journalistic writings, consisting of Evliana Berani – journalist, Luletje Prekazi – psychologist and Imer Mushkolaj – journalist, has selected three journalists to be awarded the 2022 annual award in the field of journalism, as follows:

Donjeta Murselaj, from Klan Kosova, KIKS Kosova, for the reportage which deals with the case of Florent, who is denied the right to enroll in the “Hivzi Sylejmani” gymnasium in Fushë Kosova only because he is in a wheelchair, wins the 2022 Annual Award.

Saranda Ramaj from Koha.net, for her writings with 17 sequels, which reveal the numerous misuses of state funds on behalf of seriously ill patients, wins the 2022 Annual Award.

While the Evaluation Panel for the nominations Friend of the Children, consisting of Blerta Perolli Shehu from the University of Prishtina, Anita Çavdarbasha – Deputy Ombudsman from the Institution of the Ombudsman and Adeline Sahiti – Director of the Directorate for Social Welfare from the Municipality of Pristina, has evaluated and distributed five annual acknowledgments “Friend of Children 2022”, for five personalities who, throughout 2022, have provided support and contribution to the protection and well-being of vulnerable children.

Burim Piraj receives the annual recognition “Friend of Children 2022”, he is a successful entrepreneur who runs the MEKA HALAL FOOD company in Dragash, for the continuous support of the “Team Rijad” initiative.

Luan Sallahi, businessman, receives the annual recognition “Friend of Children 2022”, for the continuous contribution he has offered to children with disabilities who receive daily services at the organization Day Care Center – PEMA.

Shpresa Xhakli, philanthropist, receives the annual recognition “Friend of Children 2022”, for the advocacy, contribution and support of services for children with autism, who receive services at the Association “Autism” – Prishtina.

Atije Idrizaj, owner and manager of AMECC Rezonanca, receives the annual recognition “Friend of Children 2022”, for the long-term support for three girls without parental care who receive services at SOS Children’s Villages Kosovo.

KOMF thanks all the winners, journalists and Friends of Children, individuals, corporations, partners and collaborators, who constantly and unsparingly prove their will and commitment in support of the community and above all of children, towards the joint noble mission of protection of children and their rights.

This event was made possible through the project “Joint Action for Decentralization” financed by the European Union in Kosovo in partnership with Organizata për Fëmijët pa Kujdes Prindëror – OFAP, SOS Fshatrat e Fëmijëve Kosovë and KMOP, as well as the program of KCSF ‘EJA Kosovo’ program, co-funded by the Swiss Agency for Development and Cooperation (SDC), Sweden and the Government of the Grand Duchy of Luxembourg .